A week in Paris is not nearly enough time to explore all of its wonders. The Eiffel Tower, the Notre Dame, Sacré-Cœur, Arc de Triomphe. All these "must-do" tourist attractions take up precious time. Then there's the quintessential "French" things every idiot tourist has to do in France: strolling the avenues; sipping lattés munching on croissants; hopping on and off Metros. All these things take time too. And then there was the thing that would naturally gain my attention: the Catacombes de Paris. Unfortunately, I only had one evening left to spend on that little gem. One evening is not nearly enough time to explore its wonders...

...I'm pretty sure I had my priorities wrong.

The Paris Catacombes are a network of underground tunnels, aqueducts, abandoned quarries and bone deposits. That's right: human remains. This network extends under the entire city. A city underneath the city, basically. A glance at the maps suggests you can walk from one side of the city to the other using this intricate network of tunnels without rising to the surface even once. That would take weeks. I guess I know what I'm doing next time I come to Paris. 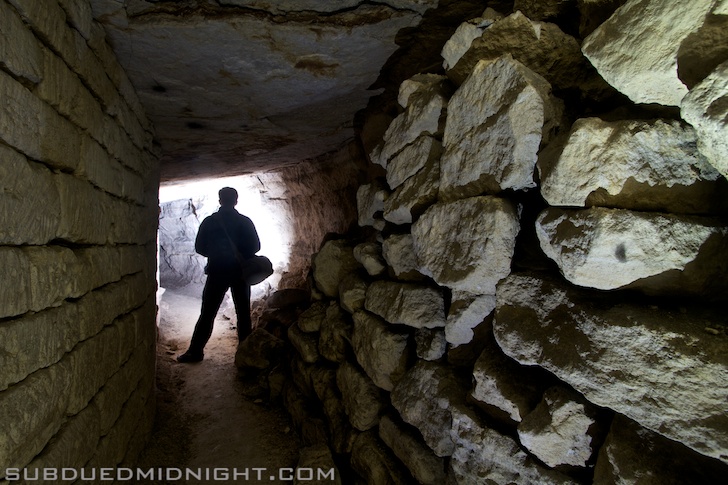 Official tours are available through the Paris Musées. I am told they are good but I cannot give my personal endorsement. I was fortunate enough to be put in touch with a local explorer before I left for France.

Local explorers of these tunnels call themselves cataphiles. They're a pretty friendly bunch and were happy to show around a fellow explorer visiting from overseas. Regrettably, I had managed to fuck up my pre-arranged meeting with a very accommodating cataphile because I was operating on holiday time and arrived 40 minutes late for our rendezvous. So I had to call it quits and return the following night, going down into the abyss on my own without any guidance or local knowledge. A daunting yet totally exciting prospect.

"every tingle and shiver, every sense and sensation, is heightened"

Let me take this opportunity to talk a little about exploring by yourself. For me, exploring is a fairly social thing. Sharing the experience with someone gives you something to talk about for years to come. It establishes you as an integral component of a team. Solo exploring, though, is a completely different exploit; every tingle and shiver, every sense and sensation, is heightened and sharpened. Even more so when you are in a completely foreign environment. You're on your own and you know it.

The night was bitterly cold and the rain shot down in small sharp drops so as to encourage me to stay indoors tonight. Not a chance - I didn't come all the way to Paris to miss out on this opportunity, however brief it would have to be.

Wearing three or four layers (and a scarf) in the freezing Parisian winter, I found a tiny fissure in the ditch of the tunnel I was walking through. This - this tiny uninviting gap in the ground - was the entrance to one of the most expansive and exciting exploratory locations I had ever visited. Squeezing through this small entrance of dirt and litter, a 10 degree temperature rise made me realise I was suddenly no longer suitably dressed for the excursion.

The biggest concern for me now was survival. It sounds absurd, I know. But here I was, in a completely unknown location with no guide and only my sense of direction and a 10-year-old catacombes map to guide me through hundreds of kilometres of tunnels. I was not going to become the first stupid tourist to get lost down here in centuries. (A young man, Philibairt Aspairt, is considered by some to be the first cataphile. He got lost in the catacombes in 1793, his body being found eleven years later). I spent what felt like forever collecting my thoughts and carefully studying my metre-long map - a map that represented just a small fraction of the underworld of Paris: 18 square kilometres. 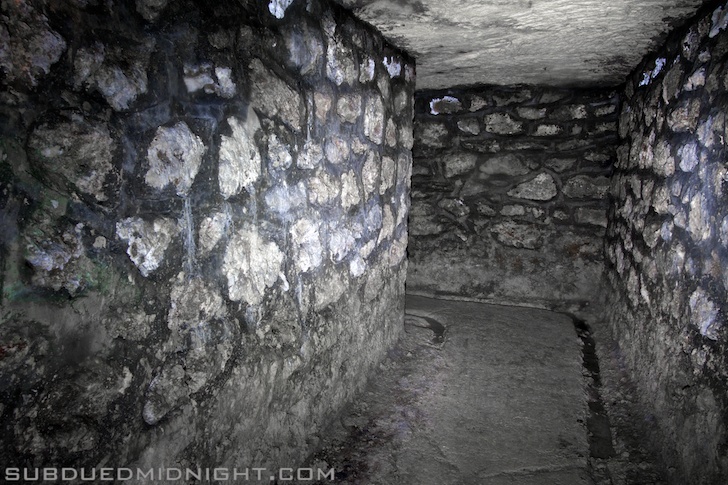 I had an entire night and morning to spend here. Several of my confidants had been given my map and directions as well as a "bingo" time to send help should I not return from the abyss. That was still 14 hours away though - not enough time should something go drastically wrong. Tread carefully now... and don't get lost!

Not ever in my exploring life had I been so excited and nervous whilst underground. Sure, above ground locations can sometimes be nerve-racking. Especially if you know you're not supposed to be there. Underground locations, however, are usually serene and inviting. And I suppose in a sense, the catacombes would be if you were knowledgeable with the location. I didn't have that luxury.

Walking through the centuries-old tunnels, every corner brought something fascinating with it. Within a few minutes of my entrance I stumbled across an entrance to a disused section of aqueduct, largely submerged. Only a few moments' walk later, a perfectly bored pit in the ground full of clear water disappeared deeper into the earth further than I could see. I still don't know what it's purpose was but I saw one or two more during my time down there. The tunnels were feature-rich with smaller offshoots and fanciful sections. I treated each of these items of interest as an area to stop and confirm my location on my quickly-deteriorating map. I would do this every 100 metres or so, such was my paranoia. 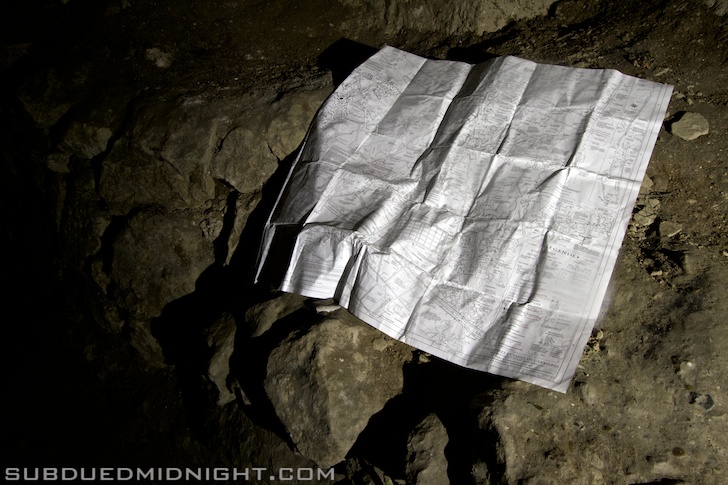 Despite my initial concern, I quickly realised that getting lost would probably be a difficult thing to do. Most intersections actually had street names on them chiselled into beautiful old stone plaques. And a lot of the major tunnels followed the road from underneath. My fears quickly subsided to a more moderate level and I was able to enjoy the experience a little bit more. For a while.

My next encounter of heightened paranoia was something that sent shivers down my spine. On a long stretch of tunnel that I was following, a light flickered ahead of me. Perhaps 20 metres or so, and just around a slight bend so that I could not see its source. It was fire.

I stopped dead still and began to breathe as quietly as humanly possible. The slight trickle of water I was walking through had now reached ankle height and it was numbingly cold. I turned my headlamp off and waited, listened. There was nothing down here that could burn, and almost certainly no ignition source. My mind began racing. Perhaps a cigarette butt dropped through a grate 40 metres above at street level had set debris on fire up ahead? Would I die down here from smoke inhalation with no way out?! Worse yet, maybe some obscure and dangerous cult were performing a ritual that I had stumbled across? Could I be in danger?

I had no idea what to do next. All my thoughts had been stripped down now to direct instinctual laws. Fight or flight, almost. I made my presence known by making a quiet tsk tsk animal sound with my tongue. It might seem like an odd thing to do but it was better than a nervous, "hello...?" or similar. It's also a sound I'm accustomed to making when exploring with friends and we're required urgently to communicate when beyond whispering distance. It's a sound that can be used to alert someone of impending danger but also doesn't introduce a high risk of being caught. It is after all, not considered a noise made by a human so being overheard making it is not a critical error.

But I got no response. I had no option now except to find out what the source of this fire was. Perilous as it may be. Carrying on through the water, which was now above knee height, I had to force myself to stop shaking. After five or ten seconds of wading, I realised it was not fear causing this but the freezing cold water which was slowly approaching "ball height".

And there was the flame. Directly ahead of me. And close enough to establish the cause of the surreal flickers. A solitary tea candle floated serenely on the water surface. My head instantly went fuzzy with confusion and disbelief. What was this thing doing here? Who had put it here? Would I bump into these oddballs further ahead? I'm not sure what it was, but I felt somewhat relieved, too. This suddenly seemed a lot less dangerous than my imagination had led me to believe. I chose to put the whole thing down to a small token that some cool young Parisian cataphile had left behind perhaps hours before. 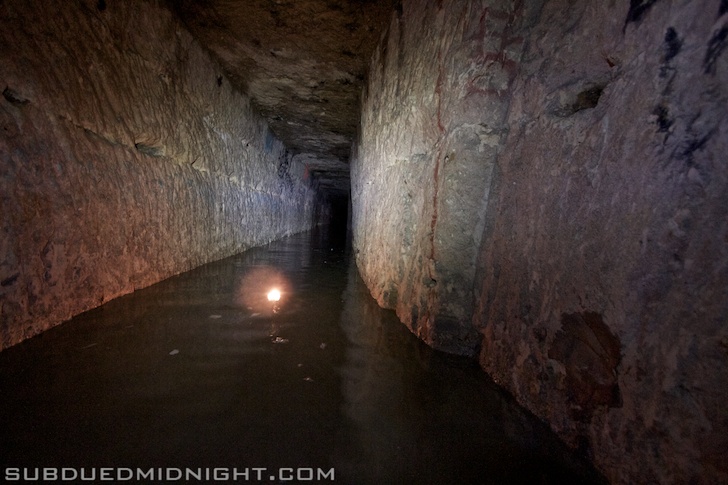 I stopped only long enough to snap up a short exposure, my balls being too cold to be mucking around with tripods.

A kilometre or so further brought me along the blocked up passages and walls of the "tourist" section of the catacombes. Sitting down on a dusty stone step here, I decided that as I had already been gone for four hours, it was time to think about an ascent back to the surface. I was already deliriously tired, soaked from the wading encounter up to my belly button, and cold. Reviewing my location on the map, I saw a little skull and crossbones symbol and a title declaring it to be the Carrefour des Morts (crossroads of the dead?!). The legend told me that the skull and crossbones symbol depicted Dépôt d'ossements. My limited french skills were enough to figure out this basically meant Human remains. Cooooooool. It was only a short saunter from where I was, so I decided to make that my last stop before returning to a warm bed. 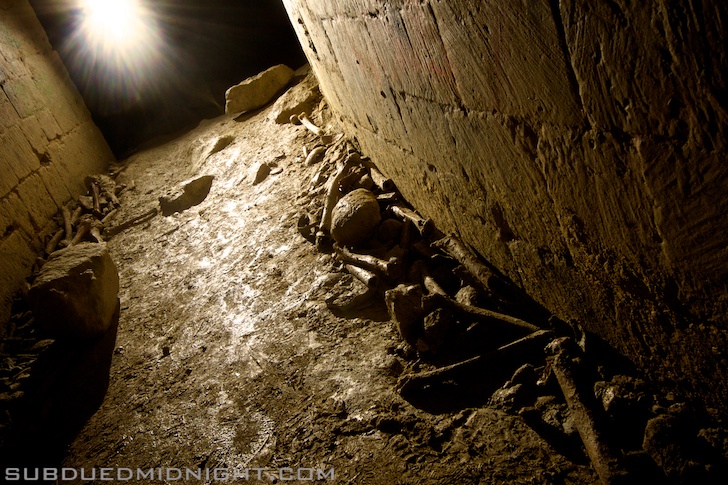 The bones were in poor condition. It was fairly obvious that many pieces had been souvenired over the centuries, the unwanted remains scattered across the floor by disrespectful visitors.

I decided to pack my things up and head back to the only entrance I knew was certainly still open and safe - the one I came in by. I turned my back to the human remains and walked towards one of the exits to the room. Closing up my bag with camera safely stowed, I stood still for a while and breathed heavily, not wanting to let this experience go quite yet.

I let the dank air fill up my lungs and consume me as I reached for my forehead and extinguished my headlamp.

I'd never experienced anything like this night before. The sheer size was something, but there was more to it than that. The history, the beauty, the almost-mystical magic about the place had left me truly in awe and I just didn't want to leave yet.

In complete blackness, I soaked in that dizzying and wondrous feeling for just a few more moments.