I make no apologies here for only taking three lousy shots. After all, there will be a Part Two. But this post serves more as a story and warning than as a photo adventure. To put it succinctly, I did not have a pleasant time; photographs were the last thing on my mind.

Draining can be a hazardous pastime. You shouldn't go in drains if you want to be safe. Of course, there are the requisite fundamentals that you always abide by: "If it rains, no drains!" etc. But this is only one basic rule. Sitting there reading Predator's "Approach" guide to draining will give you the best book-education you can get. But like anything, only hands-on experience will teach you what you need to know.

This night was one I will not forget. For all the wrong reasons.

When I enter a drain, I feel almost welcomed by it. It's inviting. An adventure always lies within. It might be a dull, uninspiring one. It might be a labyrinth of endless amazement. Regardless, I feel like I'm enjoying myself at the time.

I cannot say the same for this particular adventure.

Floatouts are always a great social activity. We rock up at an upstream entrance to a drain with our inflatable toy boats, hand or foot pumps (or for the less astute of us: lungs) and then travel downstream on foot through the drain, boats under arms.

Arriving in our city's local party district on a Friday night, having timed our whereabouts with the tides perfectly for a downstream exit, we skulked down a dark alleyway towards a heavy square manhole placed in the centre of the road's end. Three men and an eighteen or nineteen year old girl in a plaid miniskirt stood in an unlit rear doorway and watched us walk past.

Sliding the manhole aside, we established our entry strategy. Six or seven step irons encapsulated by a square shaft barely larger than the manhole itself proved quite claustraphobic. The shaft stopped after only two or so metres down and the entry into the drain itself was via a two metre-long but very narrow RCP pipe. We slid through on our fronts and created a human chain, passing camera bags, oars, uninflated boats and the like from the street down through the narrow pipe and into the drain.

From the moment of entry, this drain didn't feel welcoming to me.

Warm, milky water trickled around our feet and a distinct humidity and temperature change juxtaposed the cold night outside. The acrid smell, albeit not unfamiliar, was a reminder that not all drains are created equal.

Following the off-white trickle of drain juice, we passed several cockroach cities. Walls lined with hundreds, if not thousands, of the little creatures scurrying about as our headtorches tickled their senses. Avoiding them as you run through their home is not always guaranteed. I saw one flash across my vision as it dropped from the brickwork above and landed with a splash in the water at my feet. Another, entirely white, stood out from the rest of the crowd. Initially I thought this was an albino cockroach but learned whilst writing this that the white ones are the baby ones (although this was full size) and they become dark brown within four hours. I also learned that the reason these cockroach cities smell so awful is that the cockroaches themselves create the odour. I always just assumed they gathered in an area of drain that had nasty gases.

After fifteen minutes of walking, the drain changed from round brick to arched brick. A quick photographic opportunity presented itself. The others were waiting so I didn't have much time to get the shot I wanted. 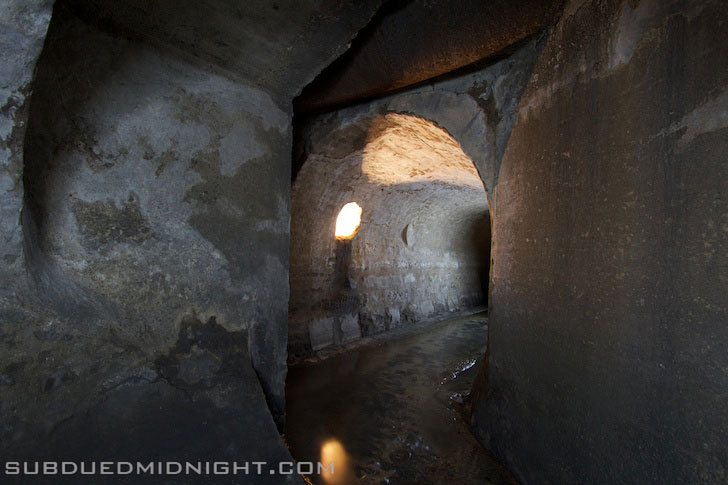 When it looked as though we had reached the tidal waters, we stopped and began the hard work of inflating our toy boats. I took a quick documentary shot and vowed never to use my onboard flash ever again. 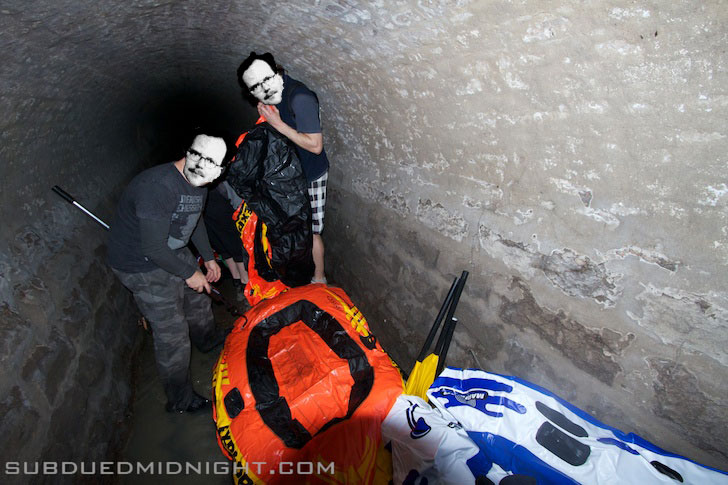 My camera went safely back into its bag and we began trudging on through the shallow water, waiting for an opportune time to hop into the boats.

With some regret, the camera did not make it back out of the bag until the adventure was nearly over. However, at the time my options seemed like: Option 1) take photos and die! or Option 2) don't take photos and focus on survival!

We floated peacefully for quite some time, occupying ourselves with little distractions and points of interest along the way. Half an hour later, we were faced with a decision.

The foul water was about half an oar deep and we paddled our way through for quite some time. My orange boat had turned mostly black with the water splashing on it here and there. No problem there, just carry on and we'll wash it off later.

Silence was broken by words I thought I would never hear on any adventure, "Turn back! We can't keep going on here." It sounded pointless to me, we needed to keep going downstream in order to exit. I looked forward and understood the context. There was no more drain. We were faced with a concrete wall. A drain that stops. A drain that decides not to go any further. I swear if I ever meet the person that designed this drain...

So we paddled back towards the junction to take the brick archway twin pipes instead.

I became the person at the back of the line of boats and, being somewhat dazed, didn't notice I was quickly falling behind.

The drain stench had become much worse on the return journey. Its overpowering force made me want to get out faster. It was then that I realised I wasn't actually going anywhere.

"I swear if I ever meet the person that designed this drain..."

I placed both paddles in the black water and gave my actions some thought. Still nothing. The stench became worse and my state of mind went with it. I sighed and looked at the onyx black water surface. Small bubbles appeared now and then. The behaviour of the bubbles alerted me that this water was a lot thicker than I had expected it to be.

Paddling was the last thing I should be doing. Churning up the silt and destroying what was probably a layer of water only half a foot deep. I was now sitting in three feet of just silt, having churned away any surface water, whilst it released nauseating and potentially lethal gases.

I began using the paddles to push my way along using the ceiling of the drain. No luck. It was slightly too far out of reach to be effective. And when I could just reach it, the paddle would just slide along without grip.

I tried using the paddle to do the same thing but on the floor beneath me. The only result was more noxious bubbles and a paddle stuck in the mud.

I realised through the absurdity of the conversation that, really, I was on my own. If I couldn't move, there was little chance of someone else being able to move too. Let alone help me.

"Could you stay there and wait for me?!"
"I'm right here! Don't worry! I'm gonna be right here until you get out!"

The words were comforting and compassionate but a feeling of despair and helplessness still came over me. Was I going to sit here and keep trying? Would doing so result in me becoming overwhelmed with the gas? I could think of nothing worse and so suddenly, the option of disembarking my vessel became very attractive.

I picked up my camera bag and secured it between my teeth. I remember the words "fuck this" rising from my throat as I looked over the edge.

I stood there, camera in mouth, boat in hand, up to my balls in this gassy muddy shit.

Although shuddering with the disgust, I remember my entire perspective changing then and there. "Hey Mr. Drab! Guess what?!"
"Yes?!"
"This mud is so thick, I can actually feel little pebbles tickling my ball sac!"

Within minutes we were back at the junction. Everyone else had gone on ahead and exited early. We went on downstream through the brick archway twin pipes. We had gone in for a floatout and damnit, a floatout is what we would have!

We travelled on through some really beautiful sections and chambers which I look forward to photographing for Part Two of this adventure. The final stretch of drain was enormous and very deep. It was eerie as well. I broke the promise I had made myself only an hour before and used my onboard flash to get a quick shot. 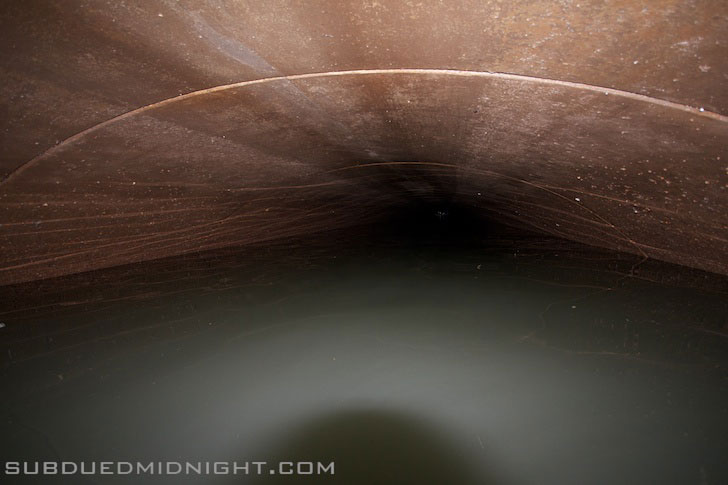 Covered in black muddy splashes, we emerged onto the river. A ferry sped past and we bounced around in its wake cheerfully. The wind was biting and we were soaked. Pulling ourselves up onto the concrete embankment, I felt lucky to be alive.

Apart from a quick once over by a police officer who thought we were burglarising yachts, the night ended well. The others arrived at the cars and we said our goodbyes. Mr. Drab and I remained in eachother's company and had a 4 am feed. 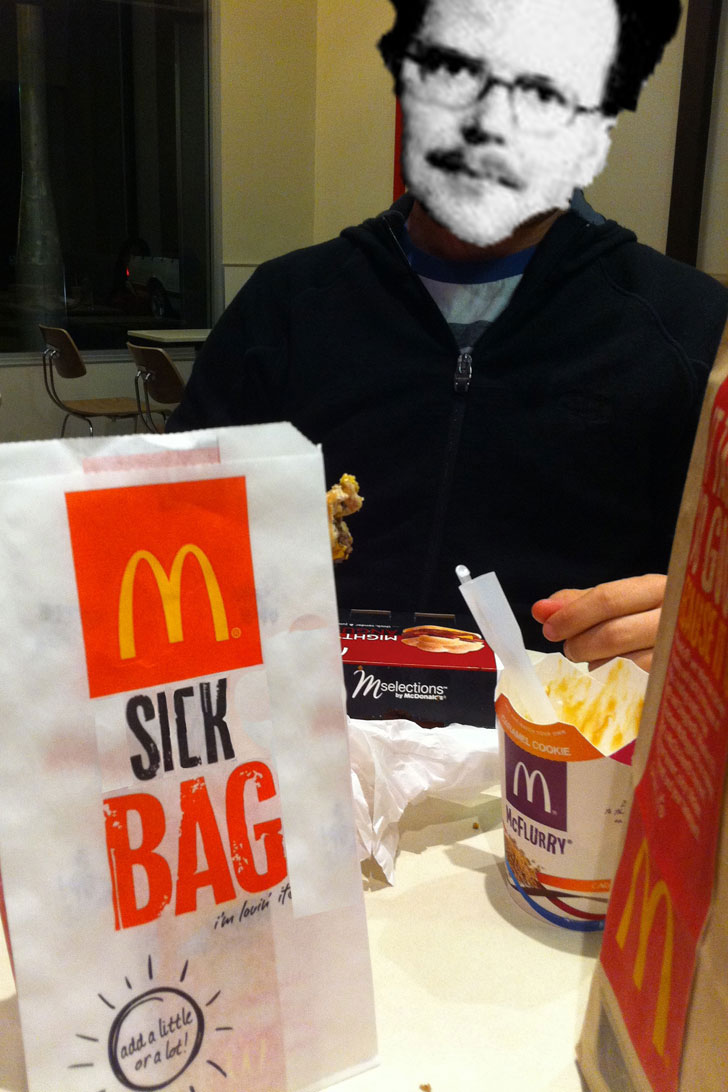 It was only after the event that I remembered people telling me that they had been to this drain and would never go back. I suppose some things you just have to experience for yourself.